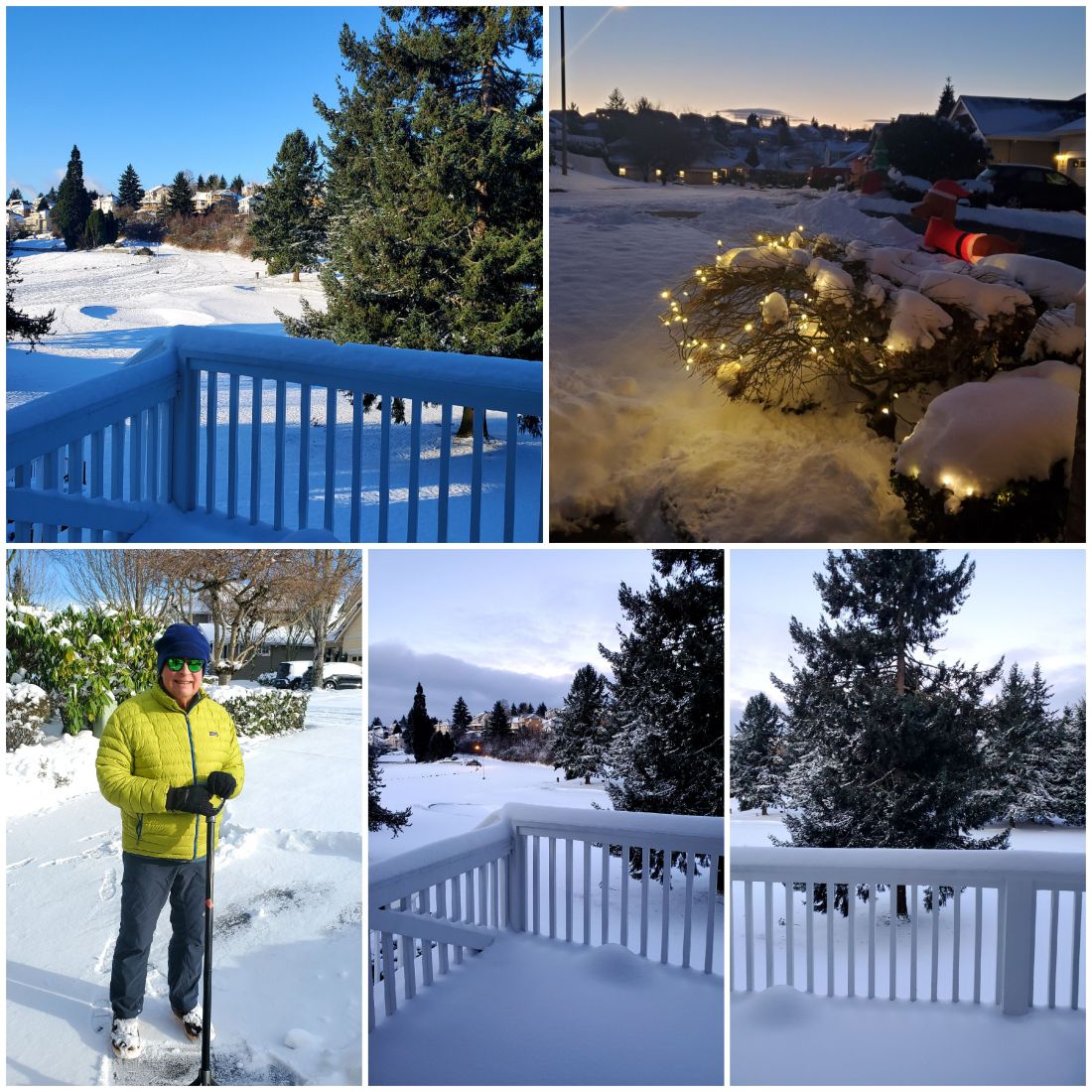 As I write this, this is the front page headline:

But before moving on to 2022, I want to pause and be grateful for:

Now to my 4 main areas of COVID-related irritation as 2021 draws to a close:

These are pretty big HOPES on my part.  I will be curious to look back in December 2022 and see which ones, if any, bear fruit.

Note: I decided to include our snow photos on this post instead of a yet another picture of the novel coronavirus 😊

I came across the absolutely best article in a recent Seattle Times.  I know many of you can’t open the link, so I will do a quick summary.

A local woman, Fran Goldman, age 90, walked six miles through the snow this past weekend to get her first dose of COVID 19 vaccine.

She had been trying everything to get an appointment for vaccine.  When she was finally successful, she didn’t let a foot of snow deter her.

Her appointment was for Sunday morning at 9:10. On Saturday, she woke up to our first snowfall and decided to plan ahead.  She got dressed and headed out for a dry run.

She had a hip replacement last year, so used her walking sticks to make the trek.  She still drives, but apparently decided not to risk it in the snow.

She made it 2/3 of the way to the hospital and turned around knowing she had this one licked.

On the day of her appointment, she wore a short-sleeved shirt so the nurse could get to her arm and layered from there.  It was a challenging hike since more snow had fallen but she arrived at 9:15, only 5 minutes late.

Not only does Fran still drive, she is taking a Lifelong Learning Class about post World War II China on Zoom, orders food online and picks it up in her car.

The article had some great quotes from Fran’s daughter:

My mother isn’t going to let a little snow stop her from getting the vaccine.  She has the attitude that you don’t let a little adversity get in your way.

She is someone who looks for solutions, not problems.

As my first friend and I were talking about the article, she said, ‘that will be you and me!’ I’ve been worried about accelerated ‘aging in place’ during the pandemic, so I sincerely hope she is right and we both have a healthy dose of ‘Fran Goldman’ in us!

See you on Friday,

I was zooming with my friend, JLQ, on Wednesday morning.  While we were zooming, she said she just saw that a mob was storming the Capitol!

Wednesday’s events brought 9/11 to mind as a reminder of the last very dark day in U.S. history.  Looking back, we were all at least united as Americans.  Not so much on Wednesday!

I happen to love D.C.  I have been there for work a number of times.  I’m a lifelong government worker.  Maybe that is why the sight of the Capitol can kind of choke me up. I have wanted to return to DC since I retired but haven’t had the opportunity.

That brings me back to Wednesday’s chaos when the mob stormed the Capitol and broke in.

I usually don’t go down this path on my blog, but I saw some things on Wednesday so I am saying some things today!

Boy was the insurrection (quoting George W. Bush) ever hard to watch! It made me feel like I woke up in another country.  Who could have expected something like this in the U.S.?  And I am saddened by the leaders that brought our country to this moment.

Heiko Mass, the German foreign minister, drew a parallel between the storming of the Capitol and the recent attempt by a mob of far-right German protesters to enter the Riechstag (the building that houses Germany’s Parliament.

There is going to be a lot of hindsight on this one, including starting why wasn’t there more security in the first place! There are certainly are going to be lots of tough questions to answer and undoubtedly there will be plenty of blame to go around.

It is hard to even glimpse a path forward.  I would like to think things will settle down after the inauguration, but I think that might be a fantasy on my part.

I believe President-elect Biden will do his level best to govern the entire nation, not just his party.  But his best is probably not going to be good enough for people who don’t trust the results of the 2020 election.  According to this NPR piece, more than 60% of Americans trust the results, but only one quarter of Republicans do.

That, my friends, is kind of scary! But hopefully cooler heads will eventually prevail and we will remember we are ‘one nation’.

See you on Monday,

Silver Bells, composed by Jay Livingston and Ray Evans in 1950

This does not describe Christmas 2020 in downtown Seattle. The sidewalks aren’t busy and there isn’t much holiday style to be seen.

We took a trip downtown a week before Christmas.  Downtown Seattle is usually a sight to behold over the holidays.  The streets are bustling and decorations are everywhere.  The hotels are busy, as are the restaurants.  Downtown is a popular destination for locals and out of towners alike.

It is pretty quiet this year.  There were maybe 4 or so people on each block.  Many of the stores have closed permanently.  There is no indoor dining so the restaurants are dark.  And the hotels look pretty quiet.  The Pike Place Market had about 40% of their usual vendors and there were NO crowds on what should have been one of their busiest shopping days.

According to the Downtown Seattle Association, this ‘horrible year’ has killed off 155 businesses in the downtown core alone – 82 restaurants, 48 retail storefronts and 25 other businesses have closed permanently. This doesn’t count the plywood planked shops that are hunkered down for the duration (from a Danny Westneat article in the Seattle Times).

Predictions are that it may get worse.

My prediction is that there is no ticket back to 2019. Who knows what will emerge in the post pandemic times?  I don’t see a back to the future scenario.

A lot of the activity in downtown Seattle is driven by workers based there.  They grab lunch in the restaurants, shop at the stores and go out for happy hour after work. There is a lot of real estate downtown occupied by businesses and their employees. Amazon and others have implemented work from home policies on a more or less permanent basis. I think most businesses have and are going to continue to shrink their footprints for the foreseeable future.

Without workers thronging the streets, downtown is going to have a tough time recovering.  Downtown has reinvented itself a number of times and I am sure it will again.  I will be curious to see what 2021 will bring to downtown Seattle and what future Christmases will be like in the city.

See you on Friday,